BURIALS HELD IN OUAGADOUGOU FOR GENDARMES KILLED IN JIHADIST ATTACK 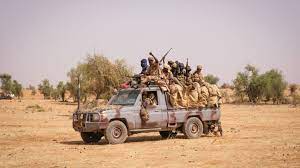 Burkina Faso held burials on Tuesday 24th November in Ouagadougou following a deadly attack on a gendarmerie in the north which left dozens dead. The deadliest attack to hit the West African country’s defence and security forces since jihadist violence erupted six years ago.

According to government spokesman Ousseni Tamboura on Wednesday, the death toll from a weekend attack has risen to 53, 49 gendarmes and four civilians. A security source on the same day said gunmen travelling on pick-up trucks and motorcycles attacked the Inata gendarmerie near the Malian border before dawn on Sunday, leading to drawn-out clashes.
Around 150 gendarmes were stationed at the facility in Inata, meaning the toll could yet rise further.
However, hundreds of people protested in several cities across the country on Tuesday to demand resignations over the « inability to stop the terrorist attacks ».

President Roch Marc Christian Kabore on Wednesday during a cabinet meeting criticised « substantial dysfunction » within the army, including in food provision. « It’s inacceptable, and that’s why I really do understand the… angry reactions, » he said as he left the cabinet meeting. Tamboura said earlier that the head of the armed forces in the north of the country had been removed from his post following Sunday’s attack.

The country has been declared in mourning from Tuesday until Thursday.
Burkina Faso has been hit by jihadist attacks since 2015, mostly in the northern and eastern regions close to Mali and Niger – countries facing their own struggles against jihadists.