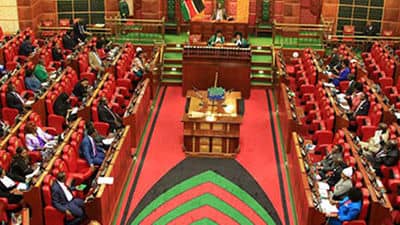 In Kenya, a fight erupted in the parliament on Wednesday 29th December as lawmakers were debating a controversial bill which contains amendments to laws governing political parties and the registration of coalition groupings for elections.

According to images broadcast on local media, the speaker suspended the session briefly after the chaotic scenes, which saw at least two rival MPs exchange blows.

One lawmaker, Bernard Koros, was injured during the fracas, and was seen with blood dripping down his face, while another was expelled from parliament by the speaker.
« I cannot accept to be injured in the national house like this Mr Speaker, » said Koros, a supporter of Deputy President William Ruto.

The legislation would allow a coalition of parties to field a candidate in the poll, a departure from the current law that requires a candidate to belong to a party or be independent to vie for a seat.
Opponents of the proposals argue that President Uhuru Kenyatta and his once foe Raila Odinga will use them to build a formidable coalition ahead of the August 9 vote.