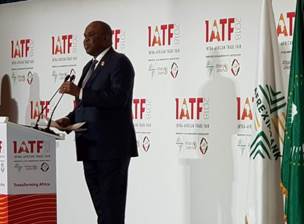 Cairo, 18 Dec. 2018: – Deals valued at $32.6 billion dollars were recorded at the inaugural Intra-African Trade Fair (IATF) which ended in Cairo yesterday, according to preliminary figures released by the African Export-Import Bank (Afreximbank).

Afreximbank, which organized the trade fair in collaboration with the African Union and had it hosted by the Government of Egypt, said that the amount represented the value of 100 deals concluded during the fair. That number might rise as it did not include some bilateral deals among exhibitors which had not been recorded.

The Bank said that the majority of the deals were in sectors of industrialization/export manufacturing ($6.2 billion); power ($6 billion); and financial services ($1.86 billion). Other key sectors included oil and gas; transport and logistics; heavy industry; mining; infrastructure; healthcare; and SME promotion.

The preliminary report also showed that there was a total of 1,086 exhibitors at the fair, with 45 countries having country pavilions. Five hundred and eighty-four companies were accommodated in country pavilions while 375 were in private sector stands. The creative industries had 36 participating exhibitors.

In addition to operating country pavilions, Egypt and Nigeria also had special country days which allowed them to enjoy a dedicated day during which they organized special programmes to showcase the business and investment opportunities in their countries.

The IATF2018 Conference, which ran alongside the trade fair, featured 42 sessions with 152 speakers.

The IATF2018, which ran from 11 to 17 December, was aimed at promoting trade among African countries and at supporting the implementation of the African Continental Free Trade Agreement.