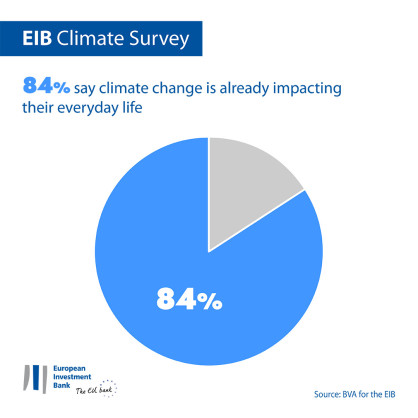 84% of Tunisians say climate change is already affecting their everyday life. 52% believe that climate change and environmental damage have affected their income or source of living. 83% of Tunisian respondents say that investing in renewable energy should be prioritised.

These are some of the key findings from the first African edition [i] of the European Investment Bank (EIB) 2022 Climate Survey. The EIB is the lending arm of the European Union and the world’s largest multilateral lender for climate action projects. Since 2018, the EIB has conducted similar large-scale climate surveys across Europe, China and the United States.

“The EIB survey shows — if proof were needed — that climate change is already affecting the Tunisian population. Tunisia is very vulnerable to climate change, water resource scarcity and coastal erosion. Beyond awareness-raising and behavioural change, investment is needed to limit the consequences of global warming. We are counting on the EIB to help us with this.”

“The EIB has operated in Tunisia since 1979. Following COP27, we are working closely with the Tunisian government and private sector partners to accelerate investments in climate action, including large-scale investments in clean energy, energy efficiency, sustainable transport, and water and sanitation.”

The survey results confirm that climate change has had a negative impact on the livelihoods of Tunisians, with 52% saying their income has been affected. These losses are usually related to severe droughts, rising sea levels or coastal erosion, as well as extreme weather events such as floods and hurricanes.

A total of 43% of Tunisians (vs. 57% of respondents in Africa as a whole) state that they or somebody they know have already taken action to adapt to the effects of climate change. Some of these initiatives include investing in water-saving technologies to reduce the impact of drought and in clearing drains to cope with flooding.

When asked to which energy source their country should direct investment to combat climate change, 83% of Tunisians (vs. 76% if respondents in Africa as a whole) said that renewable energies should be prioritised, far ahead of fossil fuels (7%).

The EIB has provided over €2.1 billion in financing to Tunisia since 2011 to support inclusive and sustainable growth in both the public and private sectors. This includes a €70 million loan to the Tunisian Ministry of Education to modernise the country’s upper secondary schools.

The EIB has operated in Africa since 1965. Since then, it has invested €59 billion in 52 countries across the continent, supporting projects for infrastructure, innovative companies and renewable energy development, as well as public and private sector entities, from micro-enterprises to the biggest multinationals. Africa needs to increase climate change spending by several hundred billion euros per year.

More than 6 000 respondents — including 500 Tunisians — aged 15 and over from ten African countries participated in the survey between 1 and 25 August 2022, with a representative panel for each of the countries polled.

About the European Investment Bank:
The EIB Group has adopted a Climate Bank Roadmap to deliver on its ambitious agenda to support €1 trillion of climate action and environmental sustainability investments in the decade to 2030 and to dedicate more than 50% of EIB funding to climate action and environmental sustainability by 2025. As part of the roadmap, all new EIB Group operations have been aligned with the goals and principles of the Paris Agreement since the start of 2021.