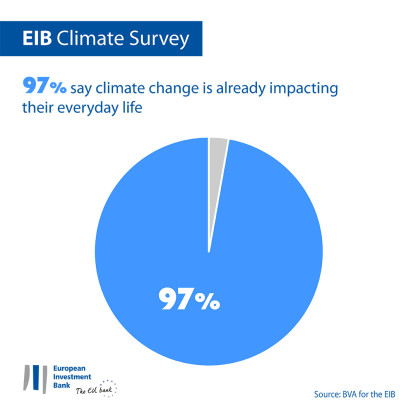 These are some of the key findings from the first African edition[i] of the European Investment Bank’s (EIB’s) 2022 Climate Survey. The EIB is the lending arm of the European Union and the world’s largest multilateral lender for climate action projects. Since 2018, the EIB has conducted similar large-scale climate surveys across Europe, China and the United States.

Kenya’s renewable energy sector is driven by a good mix of renewable energy, including geothermal, wind, hydro- and some utility-scale solar power. Kenya is already in the top 10 countries globally in terms of electricity generation from geothermal power, with close to 1 000 MW of installed capacity.

This is a sign of Kenya’s strong commitment to global climate action, along with the country’s ambitious nationally determined contribution under the Paris Agreement.

The EIB has partnered with the Kenyan government and private sector players in their work to promote the global green energy transition, taking it to the next level with climate mitigation measures in the transport and industry sectors. This is evident from the recently commissioned Olkaria Unit 6 geothermal plant, supported by the EIB. The plant will further strengthen Kenya’s ranking as a country with one of the highest shares of renewable energy (wind, solar and geothermal) in the world.

“Kenya has remarkable renewable energy resources that can be enablers to a green and sustainable economy if fully harnessed. The EU Delegation is ready to support Kenya in moving towards a more regenerative economy, to help mitigate the negative impacts of climate change. With the Global Gateway, the EU and EIB intend to promote further large-scale investments across Africa“

“The EIB is working closely with Kenyan partners to accelerate the green transition and to mobilise climate action investment, including support for large-scale clean energy, sustainable transport, water and wastewater management.”

The survey results confirm that climate change has negatively affected the livelihoods of Kenyan people, with 76% stating that their income has been affected. These losses are typically due to severe drought, rising sea levels or coastal erosion, or extreme weather events such as floods or hurricanes.

A high 78% of Kenyans, compared with the African average of 57%, say they or people they know have already taken some form of action to adapt to the impact of climate change. Some of these initiatives include investments in water-saving technologies to reduce the impact of drought and drain clearing in advance of flooding.

Meanwhile, nearly half (48%) of Kenyans say that climate change is one of the biggest challenges people in their country are currently facing, next to other top challenges such as inflation or access to food.

When asked about the sources of energy their country should invest in to combat climate change, 81% of Kenyan respondents (compared with the African average of 76%) say that renewable energy should be prioritised, far ahead of fossil fuels (12%).

The EIB has a long-standing relationship with Kenya, which dates back to 1976. Its funding in the country has brought clean energy to thousands of homes through projects such as the construction of the Olkaria geothermal plants and the Lake Turkana wind farm.

The EIB has operated in Africa since 1965. Since then, it has invested €59 billion in 52 African countries, supporting infrastructure projects, innovative firms and renewable energy schemes, in the public sector and private companies, from microenterprises to the largest multinationals. Africa needs to increase its spending on combating climate change by several hundred billion euros a year.