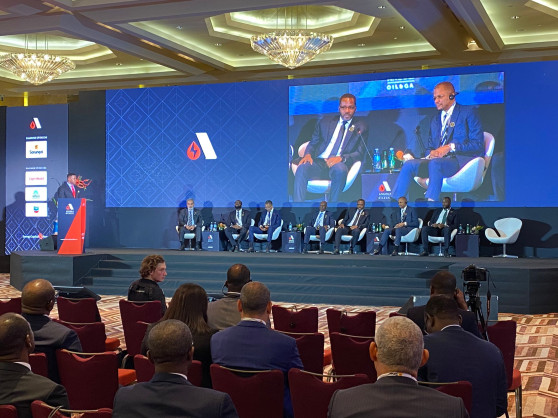 Following thought-provoking messages and welcoming addresses from both private and public sector leaders, the third edition of the Angola Oil&Gas (AOG) conference and exhibition (https://bit.ly/3VCWonI) – taking place this week in Luanda from November 29-December 1 – kicked off discussions with an opening ministerial panel.

The discussion explored the topic ‘The Right and Will to Develop: How to harness the resources of Angola and the region for an energy rich future’.

Kicking off discussions, H.E. Minister Azevedo provided insight into the country’s agenda, stating that “We have the objective of maintaining stability. Our strategy is to reduce production decline and maintain stability as far as oil production goes. Additionally, we would want to increase our refinery and storage capacity in order to reduce the imports so as to meet the domestic needs and to export oil derivatives. That is our key strategy.”

Providing insight into the Memorandum of Understanding (MoU) signed with Angola, Hon. Minister Alweendo stated that, “The MoU we have signed has to do with the fact that not long ago, we announced that we made an oil discovery. We are the new kids on the block. We need to learn from those who have gone before us. There was no better country to learn from than Angola.”

Mansaray also provided insight into Sierra Leone’s MoU signed with Angola, stating that “We are focused on African content. This signing today further strengthens our collaboration with Angola. The signing fosters our relationship with Angola so that we can learn the lessons that they have learnt in the past. We are gearing up for production. One of the companies who are exploring from the last licensing round are expecting 8.2 tcf of gas. We are a small country with new oil and gas and big ambitions.”

Following on from these remarks, H.E. Al Ghais shared insight into the upcoming OPEC meeting’s agenda, stating that, “We will be going over all the market fundamentals and reviewing everything from a purely technical perspective. We are seeing high inflation and monetary policies taking place, high sovereign debt levels, supply chain issues, and yet we still see global economic growth at 2% – however, this might be revised. We do not look at oil prices. We sit down with a method, with various bodies within OPEC sitting for two days going over all the economic fundamental parameters, supply and demand outlook and challenges and come up with a formulation of how the market will look like.”

Meanwhile, the conversation shifted to outcomes of the COP27 summit held in Egypt earlier this month, with much of the consensus being that in order to stimulate economic growth, industrialize nations and address energy poverty, the continent needs to prioritize oil and gas development.

“The two problems our continent has is energy poverty and energy security. Until these challenges are solved, we cannot talk about the transition. We need to start bringing solutions. For energy poverty, we need to increase capacity and generation. We need to increase supply and it needs to come from everything: oil, gas, hydrogen and more. Secondly, regarding energy security, we need to secure and control our resources,” stated H.E. Minister Lima.

Finally, adding to these remarks the respective ministers of the DRC and Senegal provided insight into efforts being done to maximize resources.

“We have launched a public tender. We do not have energy and need to start exploring what we have. It is not acceptable having our citizens dying without energy. We want to start drilling and developing our country. To have an energy transition you need to have energy in the first place. So, we have launched 30 blocks and a few companies will release their outcome in the next two weeks,” stated H.E. Minister Ntubuanga.

Adding to this, H.E. Niane stated that, “We are expecting first oil and gas in 2023. We are planning for Greater Tortue Ahmeyim which we are sharing with Mauritania to export up to 2.5 million tons per annum (mtpa). We are also working on FID for next year for the second phase of the project because we want to increase it to 10 mtpa. Our President, H.E. Macky Sall, stated that Senegal will continue to drill and use our hydrocarbon resources. Developed countries need to decarbonize while developing countries industrialize and we are working on this.”