THOUSANDS RALLY IN SUDAN AGAINST COUP 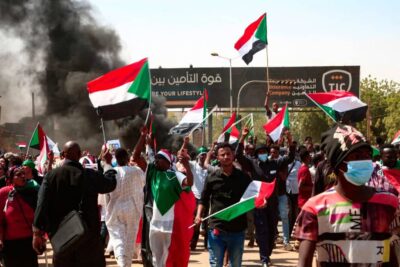 Sudanese protesters opposed to last year’s military coup marched in the streets of the capital Khartoum on Monday ahead of a visit by US envoy to the Horn of Africa David Satterfield and Assistant Secretary of State for African Affairs Molly Phee seeking to revive a transition to civilian rule.

Security forces shot and killed three protesters on Monday during rallies against last year’s military coup.
According to anti-coup medics on the Facebook page of Khartoum state’s health ministry the protesters « were killed by live bullets » by « militias of the putschist military council.

Several people were seen suffering breathing difficulties and others bleeding due to wounds by tear gas canisters.