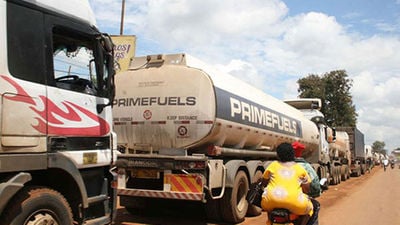 Uganda announced on Tuesday 18th January that it was suspending mandatory Covid testing at the border with Kenya after the measure caused huge truck queues, disrupting fuel supplies across the country.

On Monday, Ugandans were struggling with a fuel shortage that has sent prices skyrocketing, as hundreds of trucks remain stuck in huge tailbacks at the border with Kenya.
Jacob Elisu, motorcycle rider : « It is very hard for us to get (fuel), because you can only get in a few petrol stations. Only few, like the other one is not there, I hear even this one somehow is done. Down there it is not there, because of the delay, the delay of the truck drivers. »

Joel Aduba, civil eengineer :
« A lot of friends called me and told me about them trying to go to other petrol stations and they cannot get fuel. And a lot of cars have actually been parked. Right now it is a very big situation not just a joke »

Williams Lukongo, motorcycle rider :
« Yesterday I was in one of the suburbs around Kampala and I took a litre of petrol at 12,000 (Uganda shillings = $3.40). Yes 12,000 and I was really like “What is going on in the country ?” It is too high, I’ve never seen the prices of fuel going high to that extent. »
Energy Minister Ruth Nankabirwa said the border delays were caused by a faulty scanner used by custom officials to check vehicles and “issues regarding Covid-19”.
The (Ugandan) ministry of health has immediately and temporarily suspended mandatory testing at the two border points to ease movement of trucks into and within the country.