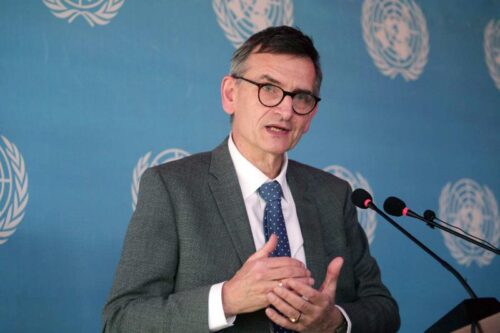 The United Nations envoy to Sudan during a press conference in Khartoum said on Monday that the UN will launch talks to help Sudan resolve its escalating political crisis triggered by last year’s military coup, earning a mixed response.

Volker Perthes, Special Representative for Sudan and Head of the United Nations Integrated Transition Assistance Mission in Sudan :
« We (UN) affirm our commitment to help as much as possible in building a future with peace and freedom. If we launch talks, then we could be contributing for this future. »

« In fact, we (UN) are acting as facilitators. We have presented a project for facilitating talks between the Sudanese people and the Sudanese parties through us, which means the talks will be indirect and that is why we have come to say that we’re here to consult with you. » he said

« If things progress well, we might be able to reach an agreement on certain points. We might reach a stage where we can say that we’re ready to move to another phase, and the round table that the prime minister (Abdalla Hamdok) spoke of when he stepped down is still available. We’re just facilitating. »

The meeting is scheduled by the UN Security Council on Wednesday to discuss the crisis in the northeast African country.

His comments come a day after Sudanese security forces again fired tear gas at anti-coup protesters, leaving two demonstrators dead including one who died from wounds to the head.