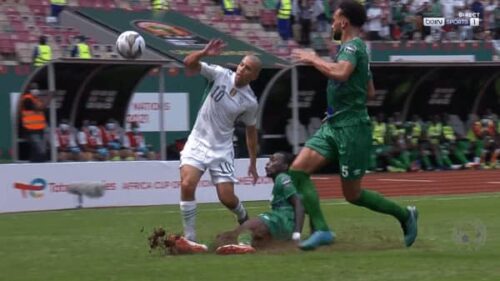 Leone Stars’s first Cup of Nations since 1996 and only their third ever, came up against an Algeria team on Tuesday 11th January at the Japoma stadium in Douala.

Minnows Sierra Leone in a surprise result at the Africa Cup of Nations drew 0-0 with the defending champions Algeria who missed a series of chances, to the growing fury of coach Djamel Belmadi on the sidelines.

But Algeria found no way past the Sierra Leone goalkeeper Mohamed Kamara, who celebrated the result of the Group E game as if it was a win. Sierra Leone squad players sprinted from the bench on to the field at the end to join the celebrations.
Former England defender Steven Caulker, who recently switched international allegiance to Sierra Leone, made two crucial blocks to help his side to a clean sheet .

There were occasions where the Sierra Leone keeper had ridden his luck in Douala’s Japoma Stadium, having frequently come to the edge of his box in an attempt to cut out danger.