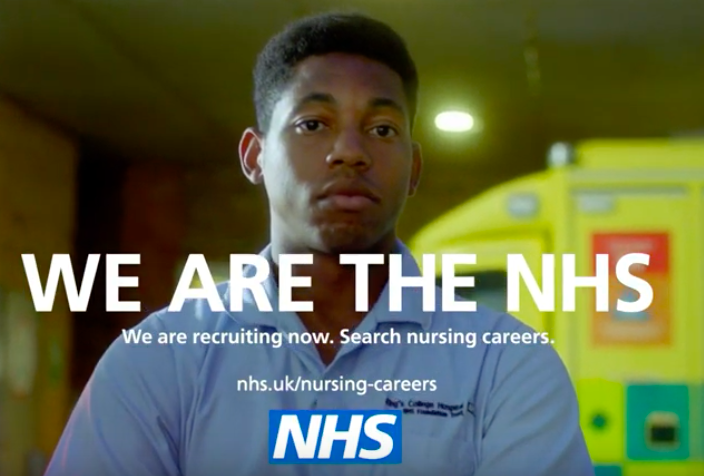 The ‘We are the NHS’ campaign is back to highlight the important, valuable and varied nursing roles available across many exciting specialisms in the NHS, and to inspire the next generation of incredible NHS nurses.

Malachi Connolly, a staff nurse working in trauma and acute surgery at NHS King’s College Hospital in London stars in a new TV advert which aims to encourage more people to consider a career in nursing.

Talking about his role, Malachi whose grandparents came to London during the Windrush era and who was born in London says: “As nurses, we can prescribe medicines, perform some medical procedures, carry out clinical research and also develop treatment plans for patients. There is so much more to modern nursing than people expect.”

The NHS in England is raising awareness of the fact that nursing offers fantastic opportunities. Nurses have the opportunity to specialise in a broad range of roles across all areas of the NHS. As well as hospital roles, nurses can work in specialist areas including learning disabilities, mental health and community care.

A big part of Malachi’s role is to assess patients and where applicable, refer them to organisations, charities or other medical teams which will help them with getting their lives back on track. As the geographic remit of King’s College Hospital covers South East London and Kent, a proportion of these referrals are victims of gang violence.

Talking about this aspect of his role, Malachi says:

“In these circumstances, I’m dealing with young people who are scared, often for their lives and the safety and welfare of their friends and family. It’s my job to talk to these young people, often young black men, and help them understand that this could be a turning point.

“As a man of African descent, I find that victims of gang violence are receptive to me, someone that looks like them and sounds like them. I’m proud therefore that in certain situations, someone may trust me enough to help them turn their life around.”

Reflecting on views of nursing within the African community, Malachi says:

“Views on nursing vary based on who you talk to, for instance, amongst fathers, there is often a hope that their sons will take up roles as doctors and engineers, these are the roles which are revered.

“When I told my family and friends about my career decision, while my parents were supportive, my grandfather was surprised and slightly disappointed. My grandmother, who had worked in the NHS as a mental health nurse herself was concerned that it was a choice which wouldn’t lead to career progression. Since they’ve learnt more about my job, my friends and family are more supportive, however, there’s still some way to go to change perceptions of nursing.

“That’s why I’m supporting the We Are The NHS campaign. I want to raise awareness of the fact nursing is varied, interesting, rewarding and importantly, it’s not just a job, there is a career there for anyone who wants it.”