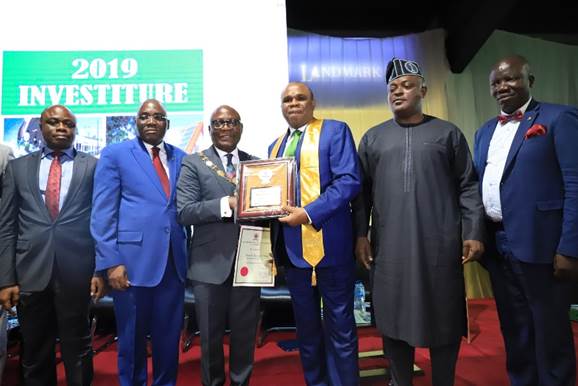 Lagos, 29 Oct. 2019: – The Chartered Institute of Bankers of Nigeria has awarded its 2019 honorary fellowship to Prof. Benedict Oramah, President of the African Export-Import Bank (Afreximbank), and 14 other leading bankers.

A citation published in the event programme for the CIBN’s 2019 investiture ceremony, which took place in Lagos on 26 October, described Dr. Oramah as a great banker of international repute and a role model for aspiring bankers. It also called him a prolific writer, a great facilitator and an astute manager.

Uche Olowu, President of the Council of CIBN told guests that all awardees for 2019 had played active roles in the banking industry and embodied the CIBN’s core values of integrity, professionalism and ethics and a continual drive to innovate.

In a response on behalf of the awardees, Prof. Oramah said that the work of CIBN was critical to Nigeria’s development and, by extension, Africa’s, adding that Nigeria could not expect to rise above its current level of development unless it had a strong banking sector.

He urged the CIBN to extend its outreach to all corners of Nigeria, including to non-bankers and the entire ecosystem that currently utilised the services of banks, adding that the institute should work to improve the culture of lending and borrowing in Nigeria.

Chief Emeka Anyaoku, former Secretary General of the Commonwealth, served as chair of the event, which was held under the theme “Nigeria’s Emerging New Economy: Opportunities, Challenges and Prospects”.

Other recipients of the honorary fellowship include Ibukun Awosika, Chairman of First Bank of Nigeria Ltd; Bakary Jammeh, Governor of the Central Bank of The Gambia; Abba Bello, Managing Director of the Nigerian Export-Import Bank; and Yinka Sanni, Chief Executive Officer of Stanbic IBTC Holdings Plc.