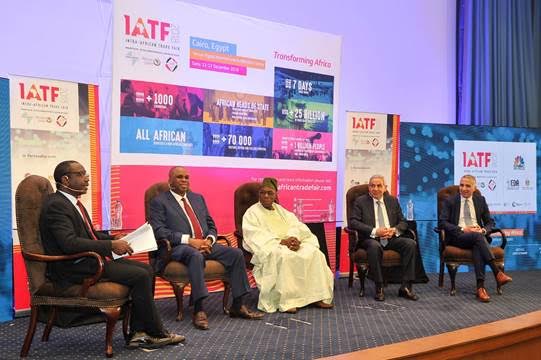 Cairo, 01 June 2018: -The African Export-Import Bank (Afreximbank) yesterday in Cairo hosted a conference to announce arrangements for the inaugural Intra-African Trade Fair (IATF2018) to be held in the city from 11 to 17 December.

Hosted by Egypt, through the Export Development Authority (EDA), and organised in collaboration with the African Union and several other partners, the IATF is aimed at deepening trade ties among African countries and at supporting the implementation of the African Continental Free Trade Area (AfCFTA) Agreement.

Yesterday’s conference featured a panel discussion entitled “Towards a Strategy for Deepening Trade Between Egypt and Africa”, with participation by Olusegun Obasanjo, former President of Nigeria and Chairman of the IATF2018 Advisory Council; Tariq Qabeel, Minister of Trade and Industry of Egypt; Dr. Benedict Oramah, President of Afreximbank; and Ahmed el-Sewedy, Chairman of the Elsewedy Group, who represented the private sector.

President Obasanjo highlighted the different capabilities and resources of African countries and said that larger economies, like Nigeria, Egypt and South Africa, had important roles in leading the transformation of the continent.

Their participation in the AfCFTA would contribute to the success of the agreement, he said, but noted that “the train has left the station” and those countries that were yet to sign on to the agreement would have to catch up.

Dr. Oramah said that the IATF was being organised as part of initiatives by Afreximbank to address the challenge of the low volume of intra-African trade, which he attributed largely to lack of market information on the continent.

He said that many African businesses were not aware that some of the products they were importing from outside the continent could be purchased for less from neighbouring countries.

IATF2018, the first-ever such fair to be organised, would provide a platform for exchange of information on markets, dialogue and meetings among businesses, he said. It would also enable traders to conclude deals and access information about investment opportunities.

Mr. Qabeel described the signing of the AfCFTA agreement as a major step towards regional integration and said that it was expected to result in a 52 per cent increase in the volume of trade among African countries and to lead to the elimination of 90 per cent of tariffs by 2022.

Mr. El Sewedy, whose company operates in several African countries, said that opportunities for trade and investment abounded within the continent. He also highlighted the important role of transport and logistics in intra-African trade.

The Cairo conference is the first stop in a promotional programme for IATF2018. Similar conferences are scheduled for South Africa, Nigeria, Kenya and Cote d’Ivoire.