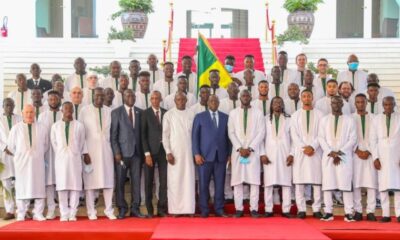 The Teranga Lions of Senegal arrived in Bafoussam on Wednesday night where they will be playing their games.

Senegal is considered as the favourite to lift the African Cup Of Nations trophy in Cameroon. Senegalese President Macky Sall on Tuesday at the presidential palace in Dakar the national flag to the national soccer team of Senegal before they had to set off for Cameroon ahead of the AFCON.
During the ceremony, Kalidou Koulibaly, captain of the Senegalese national soccer team said :
« We are honored to receive from your hands the flag of our nation to raise it as high as possible, at the top of African soccer. We have a proud consideration of our mission, that of defending the colors of our country. »
« We are going to Cameroon with our involvement and that of an entire nation, we are going with a lot of ambition and desire, we are going with the win, to borrow the soccer jargon and we will return with the pride of the accomplished mission. » he added.

President Macky Sall asked the Senegalese lions to bring victory home :
« This CAN remains a moment of truth for Senegalese soccer, a crucial moment when it must give itself a requirement of victory and a definitive prospect of triumph for the nation that has been waiting with hope for so many years. »

However, ahead of the preparations for the Africa Cup of Nations, nine of the travelling party returned positive results, with Leicester’s Nampalys Mendy among three players to have caught the virus. Pape Sarr – on loan at Metz from Tottenham – and Mame Thiam of Kayserispor in Turkey are the other two.