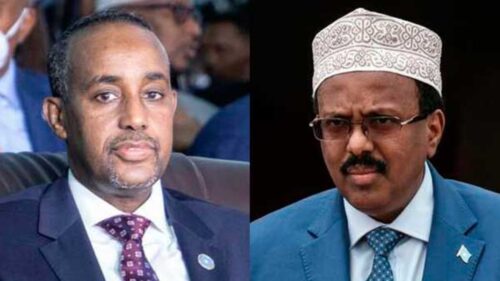 In Somalia, Prime Minister Mohamed Hussein Roble on Sunday 09th January hosted talks as the country’s leaders strike a deal to wrap up parliamentary elections by February 25 after repeated delays that have threatened the stability of the country.

The agreement was reached after several days of talks hosted by Prime Minister Mohamed Hussein Roble with state leaders to try to defuse a bitter political crisis.

Mohamed Ibrahim Moallimuu, speaker of the office of Somali PM : « The ongoing election of the House of the People (of Somali Parliament) will be completed between the periods of January 15 and February 25, 2022. »
« Amisom should reinforce and protect the Presidency of Somalia (Villa Somalia). » he added

Roble and Somalia’s President Mohamed Abdullahi Mohamed, better known by his nickname Farmajo, have long been at loggerheads over the long-delayed elections, with fears their squabbling could erupt into violence.