ERITREAN ARTISTS PROFIT FROM PEACE TO MAKE THEIR MARK ON ETHIOPIA 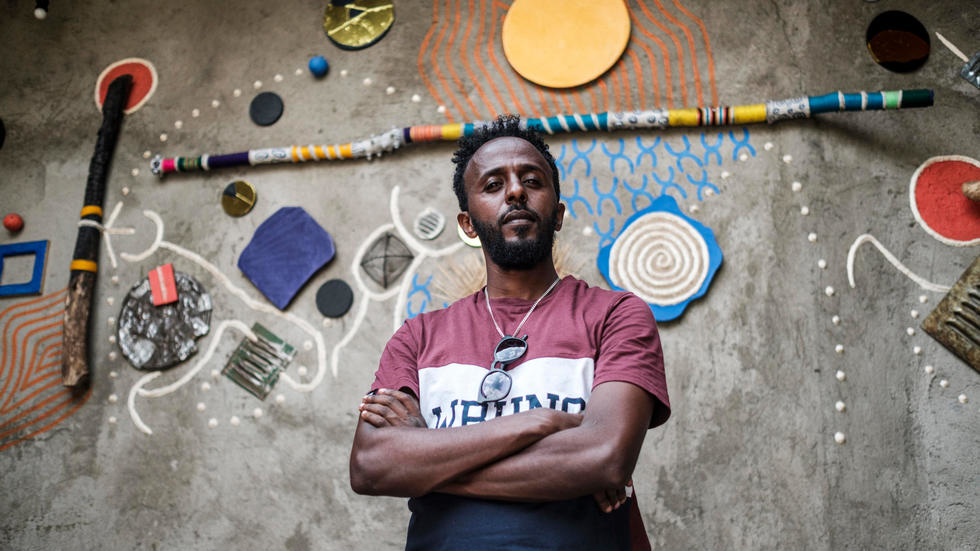 When Eritrean painter Noah Mulubrhan crossed into Ethiopia last year, he had little desire to stay — and even less of an expectation that the move would be a boon to his career.

The 35-year-old was taking advantage of the sudden rapprochement between the two countries to visit the grave of his long-dead father in Addis Ababa, something he had been unable to do earlier because of the stalemate resulting from the 1998-2000 border war.

During his visit he was captivated by the country’s buzzing art scene and decided to join more than a dozen other Eritrean artists and musicians who are trying to make their mark on Ethiopian cultural life.

Noah recently concluded his first solo show of 35 acrylic paintings — some of them street scenes, others abstract meditations on concepts like hope.

Art can be a vehicle for Eritreans and Ethiopians to celebrate all they have in common, from language to religion to culture, Noah told AFP.

On Tuesday Ethiopian Prime Minister Abiy Ahmed will accept the Nobel Peace Prize in large part for setting the peace process with Eritrea in motion back in June 2018, a move that stunned observers at home and abroad.

The early fruits of this daring initiative were remarkable.

After Abiy and Eritrean President Isaias Afwerki met and embraced on a tarmac in Asmara, the Eritrean capital, they reopened embassies, resumed flights and held a series of meetings across the region.

But the initial optimism fuelled by these gestures has faded, and citizens of both countries complain that they are still waiting for meaningful change.

The Isaias government, widely considered one of the world’s most repressive, is sticking by policies like compulsory national service, which forces thousands of Eritreans into military training even before they finish secondary school.

There has been no visible progress on demarcating the two countries’ 1,000-kilometre (600-mile) shared border.

And mere months after they opened, border crossings like the one Noah used to enter Ethiopia were closed again with no explanation.

By showing their own work and collaborating with Ethiopians, Eritrean artists offer a vivid counterpoint to claims that peace has yielded few benefits for ordinary people.

For Nebay Abraha, a 23-year-old Eritrean artist now living in Addis Ababa, peace has been a godsend.

Nebay entered Ethiopia via the dusty border town of Zalambessa over a year ago.

Once in Addis, he met up with Ethiopian painters he was already friends with on Facebook.

They have since helped him find space in two group exhibitions for his mixed-media collages and portraits that incorporate materials ranging from charcoal to magazine clippings.

It’s a far cry from toiling in obscurity in Asmara, where he says there was little hope of selling much work or getting international exposure.

“If there was no peace I wouldn’t have this chance,” he said. “I would be forced to stay and protect Eritrea. So peace is the most important thing in my opinion.”

Life is not all roses for the group of Eritrean artists trying to build new lives in Ethiopia.

In Asmara, Nebay had an apartment and a separate studio, but these days he works out of his cramped living space on the outskirts of Addis.

One recent afternoon, he stood at an easel set up mere inches from his mattress and a small crate that held his coloured pencils and pastels, as well as pasta and other groceries.

He said life was even harder for older artists who are in some cases leaving their families behind, but that the opportunities Ethiopia provides make the sacrifice worth it.

“I don’t have regrets because I have been able to show my work here,” he said.

Like many other Eritrean artists in Addis, both Noah and Nebay produce largely apolitical work and are reluctant to comment on political developments in Eritrea, where they both hope to live again one day.

But they are heavily invested in the success of the peace deal and hope their work can move the process along.

Noah is currently seeking sponsors for an exhibition that would feature Eritrean and Ethiopian artists side-by-side.

“I would like to share the experience that I have gotten here,” he said. “So collaborating with artists from both countries is very important.”

As for the Nobel, Noah said Abiy deserves it despite the peace deal’s slow implementation.

“There is unfinished business. We are waiting. It is a process, I know,” he said. “Everything happens in time.”