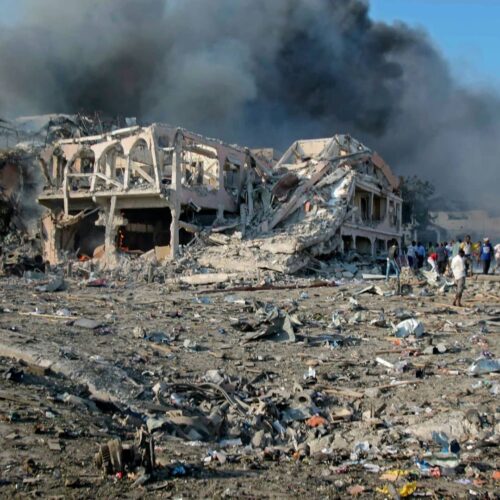 In Somalia, several people were killed on Wednesday in a suicide car bomb blast in the capital Mogadishu.

the Al-Shabaab jihadist group claimed the attack and said in a brief statement that it was targeting « foreign officers ».
The government said in a statement on Twitter that it condemned the « cowardly » suicide attack, and gave a toll of four dead and six injured. Abdiweli Mohamed Mohamud, eyewitness :
« I came here running after the blast, then I saw a burning tuk tuk vehicle, it’s there now. I helped to get three dead bodies out of it. »
« In total, I saw eight dead bodies and three injuries. » he added
Another eyewitness:
« While we were busy helping the first person, we saw a second man burning. I saw a dead body here, and another one there. One is there and another one is on that side, including a soldier. »

It took place only days after Somali leaders had agreed on a new timetable for long-delayed elections in the country.