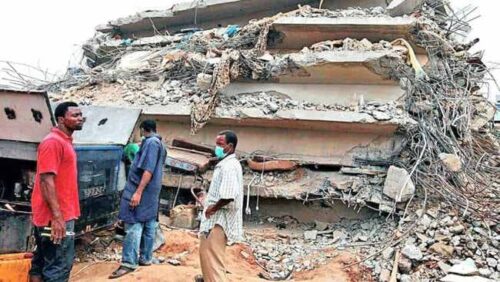 In southern Nigeria, police said on Wednesday that at least three people, including two children, were killed and another 18 people rescued when a church collapsed.

The church collapsed on Tuesday evening in the Okpanam suburb of Asaba, the capital of Delta State.
Eleven of those rescued were still being treated in hospital.
Kingsley Otuaro, Deputy Governor of Delta State said : « In my inspection visit, we found out yours truly that it could have been worse because what I saw was almost a total collapse. We understand that we had many a lot of children upstairs when the building came down completely, so it could have been worse. »
« I want to thank God for the coordinated responses of the various ministries, departments of agencies, in the rescue operation such that we are able to have so many alive with minimal casualties as it were. » he added

Bad workmanship, low-quality materials and corruption to bypass official oversight are often blamed for Nigerian building disasters. According to a South African university researcher, since 2005, at least 152 buildings have collapsed in Lagos, a city of about 20 million people.