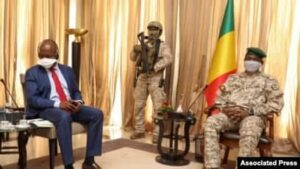 The spokesperson for Mali’s military junta, Colonel Abdoulaye Maiga reading from a statement on national television, said on Monday that the regime « The government of Mali strongly condemns these illegal and illegitimate sanctions taken by both WAEMU and ECOWAS, organizations founded on pan-African solidarity and ideals, oddly enough at a time when the Malian Armed Forces are achieving spectacular results in the fight against terrorism, something that has not happened in over a decade. » sanctions imposed on the country by the Economic Community of West African States (ECOWAS), and announced the recall of Bamako’s ambassadors to the West African nations involved and the closure of air and land borders with them.

« The government of Mali regrets that sub-regional West African organisations are being exploited by extra-regional powers with ulterior motives. » he added

« In the face of any possible deployment of foreign forces against our country, the government of Mali calls on the defense and security forces, as well as the population, to redouble their vigilance and remain mobilized. »

« From now on, on the basis of reciprocity, Mali has decided to recall its ambassadors accredited in ECOWAS member states and to close its land and air borders with the nations involved. »

ECOWAS and the West African Economic and Monetary Union (UEMOA) on Sunday imposed a range of economic and diplomatic measures against Mali, including border closures and a trade embargo, saying the junta’s intention to remain in power for several more years was « totally unacceptable ».
The meeting in Ghana of regional leaders followed months of increasing tensions over the timetable for restoring civilian rule in Mali after two coups and a military takeover.